After Brief Dip in 2020, Carbon Emissions Rebound Close to Pre-Pandemic Levels in 2021: Study

By TWC India Edit Team
Carbon emissions continued to peak back in 2019, but when the COVID-19 pandemic poked its ugly head out in 2020, it had an unexpected and unprecedented beneficial impact on climate change. With the majority of the world cloistered in their homes due to the country-wide lockdowns, carbon emissions dropped by 5.4% post-pandemic, with CO2 emissions falling from 36.7 billion metric tons to 34.8 billion metric tons at the height of the pandemic. From Italy to India, the world began to hope for cleaner air as carbon emission hit record lows.

But this ray of hope, minuscule as it was, disappeared in a poof, as a newly released study has stated that CO2 levels are once again close to the pre-pandemic levels this year. The research came out just as the COP26 began in Glasgow, where world leaders are scrambling to find ways to keep climate change under control. As per the study, carbon emission levels have bounced back this year, almost hitting the 2019 mark. According to the Global Carbon Project, by the end of 2021, we will have emitted around 36.4 billion metric tons of carbon; that is a 4.9% rise in CO2 levels since the previous year. The transportation emissions still remain low, but coal and natural gas emissions have surged in the power and industry sectors.

While scientists were expecting a rebound, the intensity and rapidity of the rebound have taken them by surprise. But with that said, the researchers have warned of a further rise in emissions in 2022 if road transport and aviation return to pre-pandemic levels and coal use remains stable. 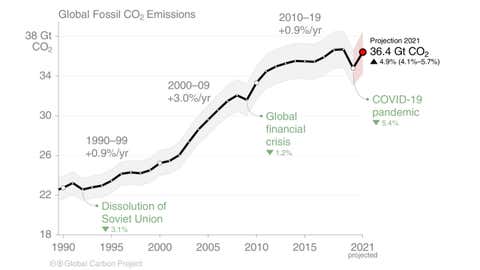 Which countries are spewing out the most carbon?

China, notably absent from the COP26, recovered more quickly in terms of carbon emissions than other countries. It is also one of the few countries where emissions increased in 2020. Greenhouse gas emissions by China were 7% higher this year compared to 2019. According to Corinne LeQuere, a climate scientist, while most countries returned to pre-pandemic trends, China's emission increase was primarily responsible for global figures bouncing back to 2019 levels rather than falling significantly below them. India, not very far behind China, saw a rise in carbon emissions by 3% since 2019. Meanwhile, the United States, the European Union, and the rest of the world report totals below pre-pandemic emission levels.

As power plants and industries burn more coal and natural gas, global carbon dioxide emissions are surging once more, closing the window for keeping global warming to 1.5°C. World leaders are attempting to curtail the rise in the global average temperature of 1.5°C (2.7°F) by the end of this century, the lower limit agreed upon at the Paris Agreement of 2015. Scientists believe that this lower limit is necessary to avoid the worst effects of climate change. And in order to achieve this mark, scientists had previously estimated that we needed to achieve net-zero emissions by the year 2050. When total CO2 emissions from fossil fuels and net land-use change are added together, total CO2 emissions have remained relatively stable over the last decade, averaging 39.7 billion tonnes. According to the report, atmospheric CO2 concentrations are expected to rise by 2.0 parts per million (ppm) in 2021, reaching 415 ppm on an annual basis, a lower increase than in recent years due to La Nina conditions in 2021. The remaining "carbon budget" or the amount of CO2 that humanity can emit to limit global warming to 1.5°C, 1.7°C, and 2°C has shrunk to 420 billion tonnes, 770 billion tonnes, and 1,270 billion tonnes, respectively, as per the researchers—equivalent to 11, 20, and 32 years at 2021 emissions levels. This means that given the current rate of emission, the study predicts that the 1.5°C rise in temperature since pre-industrial time will be reached in just 11 years.

"Reaching net-zero CO2 emissions by 2050 entails cutting global CO2 emissions by about 1.4 billion tonnes each year on average," said Pierre Friedlingstein, the lead author of the study. "Emissions fell by 1.9 billion tonnes in 2020—so, to achieve net zero by 2050, we must cut emissions every year by an amount comparable to that seen during COVID. This highlights the scale of the action that is now required, and hence the importance of the COP26 discussions. "I believe (the 1.5°C goal) is still viable, but the longer we wait, the more difficult it will become...immediate action and reductions are required,” he added.

The 2021 edition of the Global Carbon Project was published on November 4 as a preprint and is undergoing an open review in the journal Earth System Science Data.