By: TWC
Suez Canal has been one of the most famous and busiest shipping lanes in the world since its construction more than 150 years ago. The narrow artificial waterway—up to 193 km in length—runs to the north-south of the Isthmus of Suez in Egypt and is an important maritime route connecting two seas: the Mediterranean and the Red sea.

A week ago, on March 23, 2021, a giant container ship named MV Ever Given managed to get itself stuck in between the Suez Canal, blocking the key artery that helps transport approximately 12% of global trade. The canal sails goods to various parts of the globe, including Asia and Europe, and the obstruction affected more than 369 cargo ships in one week.

Ever Given is a whopping 400m-long cargo ship—equivalent to the Empire State Building. Today, on March 29, the ship has been freed and re-floated, as per the maritime service provider Inchcape Shipping. But, what exactly caused such a massive ship to veer off its course? A desert storm!

What is a desert storm?

Sand or dust or desert storms occur typically in the dry places of the world, where the particles of dirt are loosely bound to the surface. When it prevails, the wall of dust and debris forms, which moves with the help of strong winds. This wall can be dense, while it may extend up to miles and go as high as several thousand feet.

On the morning of March 23, a similar strong desert storm whipped over the parts of Egypt's Sinai Desert, which is said to have triggered the Suez Canal crisis. A gale-force dust storm moving at the speed of more than 55 kmph prevailed over the Suez Canal that day. Reportedly, the presence of excessive dust caused the mega-ship to deviate from its course and get grounded diagonally near the southern end of the canal.

Taiwan-based Evergreen Marine Corp., which was the ship’s operator, said in a statement, “This accident occurred at 6 nautical miles from the southern entry of the Canal as the container ship proceeded northbound through the waterway from the Red Sea. Gusting winds of 30 knots caused the container ship to deviate from its course, suspectedly leading to the grounding.”

What causes a dust storm?

Dust storms are common in the Sinai desert during this time of the year. They are mostly created with the help of extremely strong winds—produced by thunderstorms. In the dry region, winds can easily lift dust rested on the ground, which swirls up to form a dust storm. The storm can travel up to hundreds to thousands of kilometres. 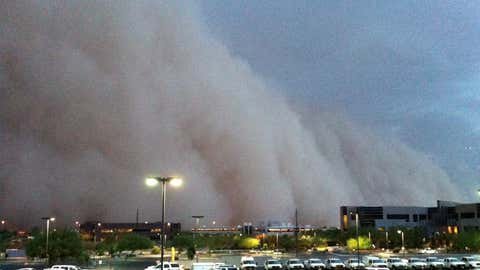 Dust storms can also take place in an area, which is devoid of plants, along with a flat surface. These features help the wind to gain momentum and become stronger to drive such storms. These storms are categorised as the common meteorological hazards in arid and semi-arid regions like the Middle East and North Africa.

Desert storms can majorly impact visibility, thus creating navigation problems. As per the reports, the Suez Canal Authority (SCA) states that the incident occurred mainly due to the lack of visibility triggered by the bad weather conditions when winds reached 40 knots. This impacted the control of the ship, which was travelling from Yantian, China, to the Dutch port of Rotterdam.

What are the impacts of dust storms?

The dust storm can have severe implications on humans as well as the environment. The dust particles, which have a size larger than 10 micrometres (μm)—not inhalable—may damage skin, cause eye irritations, conjunctivitis and ocular infection. On the other hand, the inhalable particles of less than 10 μm can cause respiratory disorders like asthma, tracheitis, or pneumonia. Moreover, such storms can also trigger infectious diseases, which can be transmitted through the dust that stays in the air for a longer time.

In addition, these extreme dust storms may also severely impact the yield of crops, damage plant tissue, which may reduce photosynthetic activity. The dust deposits may lead to the filling of irrigation canals, disrupting transportation routes and polluting the river and stream water quality.

On the side, these storms are among the best natural sources of micro-nutrients for several tropical ecosystems as they transport iron and phosphorous to parts of the ocean that lack them. In this way, they help marine biomass production. Saharan dust particles are thought to fertilize even the Amazon rainforest.

What is the present situation over the Suez Canal?

The recent reports suggest that the Ever Given ship has been successfully refloated after stranding for a week. The operation was done with the help of 10 tug boats, sand dredges and other equipment.

Though it sounds like merely a traffic jam, the magnitude of this problem is big! It has disrupted the global supply chain at a time when most economies are just starting to recover from the pandemic. It has been estimated that the standoff could have created a loss of billions of dollars. 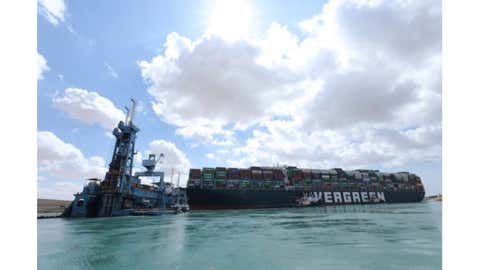 Rescue vessels work at the site of a container ship trapped on the Suez Canal of Egypt on March 26, 2021. (Suez Canal Authority/Handout via Xinhua/IANS)

The mega-ship in itself contains myriad supply items from food to furniture in about 18,300 containers. Reportedly, the last time the canal got blocked was back in 2004 for three days, when an oil tanker was stuck in the waterway. Whenever the canal is blocked, the only alternate route is a long detour via the Cape of Good Hope, which includes around 15 days of additional travel time.