By TWC India Edit Team
A giant iceberg, which is larger than some of the largest cities like Mumbai and New York, has just broken off from the ice shelf of Antarctica. The alarming incident has been notified by the British Antarctic Survey (BAS), which reported that the iceberg of approximately 490 square miles detached itself from the Brunt Ice Shelf in February 2021. In comparison, Mumbai City is only 233 square miles, while New York is 302 square miles.

The break showcased a new chasm, named the North Rift, in the Brunt Ice Shelf. It is the third major crack discovered on this particular ice shelf in the last 10 years. As per the National Oceanic and Atmospheric Administration or NOAA, icebergs are pieces of ice that have broken off from glaciers or ice shelves and float in open water.

The other two are named Chasm 1 and Halloween Crack, which are measured to be of the same size in the last 18 months, which indicates they are not growing. The team at BAS was actually expecting such big calving to occur as such a large ice shelf is often prone to break-offs, especially when the ice deposition is falling year-on-year.

"Our teams at BAS have been prepared for the calving of an iceberg from the Brunt Ice Shelf for years. Over [the] coming weeks or months, the iceberg may move away; or it could run aground and remain close to Brunt Ice Shelf," said Dame Jane Francis, the director of the BAS, in a statement. 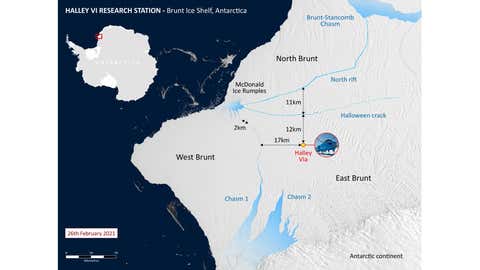 The first sign of the calving event was noted in November 2020 when the North Rift chasm started to grow towards another large chasm located about 35 km away from the Stancomb-Wills Glacier Tongue. However, it was only in January when the rift started to occur at up to 1 km per day. This resulted in the formation of a large cut on the ice shelf.

On February 26, the crack widened by several hundred meters in just a few hours and eventually broke off, reported the BAS.

In total, the Brunt Ice Shelf is nearly 492-foot-thick and stretches up to a distance of 2 km per year. It is considered to be the most monitored ice shelf on Earth. About 16 GPS automated networks of high-precision instruments are placed near the Halley Research Station of BAS. They are involved in measuring the deforming and moving of the ice shelf and report data on the daily basis to scientists.

However, what exactly caused this calving episode is yet to be deciphered by the experts. The official statement reveals that ice break-off occurred due to natural reasons and they are yet to confirm if climate change played a role.